The city lights move in rhythmic march, like ants following the sugar trail up and down the streets.  There's always a new event coming up -  a show, entertainment, restaurant, promotion and exhibition, to keep the city lively and sparkling as red wine. Now that winter snow has melted, the garden beds are fresh as rain, while grey pigeons hover like expectant mothers.

At one tall building, a woman dangles at the edge of her window condominium.  She contemplates killing herself by hurling her body over the steel rails.   The cold gust of wind doesn't bother her; she is numbed emotionally.   Though she is considered a bright star in her profession, her personal life is crumpling beyond her control.    Her mind falters as it had been happening lately.   She hesitates, mesmerized by the clouds, floating like leaves on pond.   A scream is heard from below, as footsteps clamber up, coming nearer and nearer. 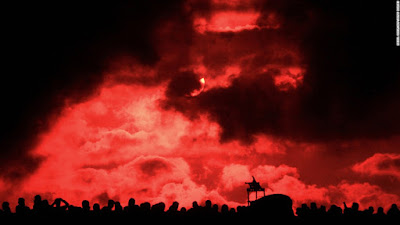 
Posted for D'verse Poets Pub - Haibun Monday with guest blogger Thotpurge ~
The woman in the news was saved and was placed under suicide watch.
Thanks for the visit ~
Posted by Grace at 12:56 PM