I thought him first a ferryman, but I was wrong.

He wore the night as one walks with a cane.

Slipping on an ancient body, he was an old

hand to assist you in your crossings.

Next, I thought of him a sentinel & maybe I

am right.   He watches the night closely as I count

time striking at midnight before the new year.   His

black suit scarcely moving in the wind.   His eyes

an orb of midnight oil, brooding as crows

Casting shadows in this street in middle

of the town square.  I first ran into him,

waving my passport, asking him where was Kipling

station.  He pointed it to me in the map & even

gave me tips to reach the airport.   I thanked him

as if he was a locksmith.   He brushed it off, saying

the city can be a puzzle

in his grave watchman's voice.

That's me, confused as a lost cloud

With a ring of copper keys on my hand.

He said, a bunch of keys confused him.   He prefers

I was getting on my way when another man

approached him for help on directions.

you where to fish, where the water pulls, how to reel

It now occured to me what he really was.

He is a tide maker.

He listens to the currents & shapes the tides.

He catches the moon and puts it

inside the street lamp.

And he holds the one silver key to close & open it

To whoever knocks at his door

Please, give me back my secrets. 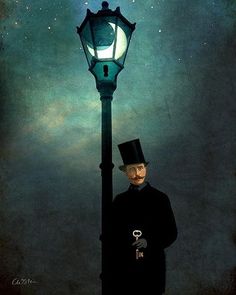