I watched this beautiful video and it is amazing !


I wanted to write a verse,  a poem or a story
but I found out words can't describe the sheer
beauty of our galaxy.
http://vimeo.com/24253126 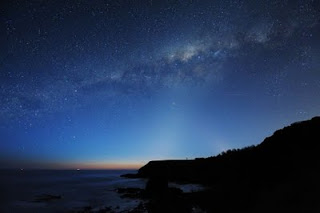 Amateur astronomer Alex Cherney spent a year compiling 31 hours of exposure over six nights on Southern Ocean Coast in Australia into "Ocean Sky," the stunning video that took home the overall prize at the STARMUS astrophotography competition.
The STARMUS site says of the winning entry:
"In this compilation see our Galaxy, rising and setting over the turbulent Southern Ocean, connecting the distant stars to that other fascinating interface, the ocean shore. In between the action comes from the scudding clouds and the only evidence of life, coastal shipping and the occasional aircraft darting through the night. Beyond our galaxy, its nearest galactic neighbours, the Magellanic clouds, rise high in the sky, while moonrise suddenly reveals the remarkable landscape of Australia's south coast."
http://www.terrastro.com/
Posted by Grace at 9:42 PM