Where the forest birds tarry slow
Where bison graze & die
There's my boreal forest, my sky
It matters much to me

My lantern's light is fading low
I raise my voice to wind
Is it too late, too late, I cry?
Death is noisy machine

Twilight comes with heavy yoke
Choking every wildlife
With poison, we drink our stench
Money is new sun 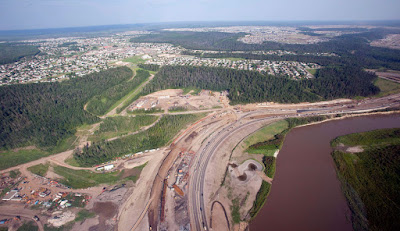 Photo by  JEFF MCINTOSH/THE CANADIAN PRESS
The Athabasca river, highway construction and suburbs seen from a helicopter in Fort McMurray, Alta., in July 2012.

I have been reading the Atkinson Series:  Shifting Sands, Examining the Costs of Oil Sands Bargain.   The Athabasca River originates from a glacier in Jasper National Park, located in the Rocky Mountains. It is the longest river in Alberta, and runs past the oil sands. Organizations like the Pembina Institute have long been asking for strict rules for oil sands developers and processors to protect the river.

Posted for D'verse Poets Pub - Poetics:  What does the Watchman See?